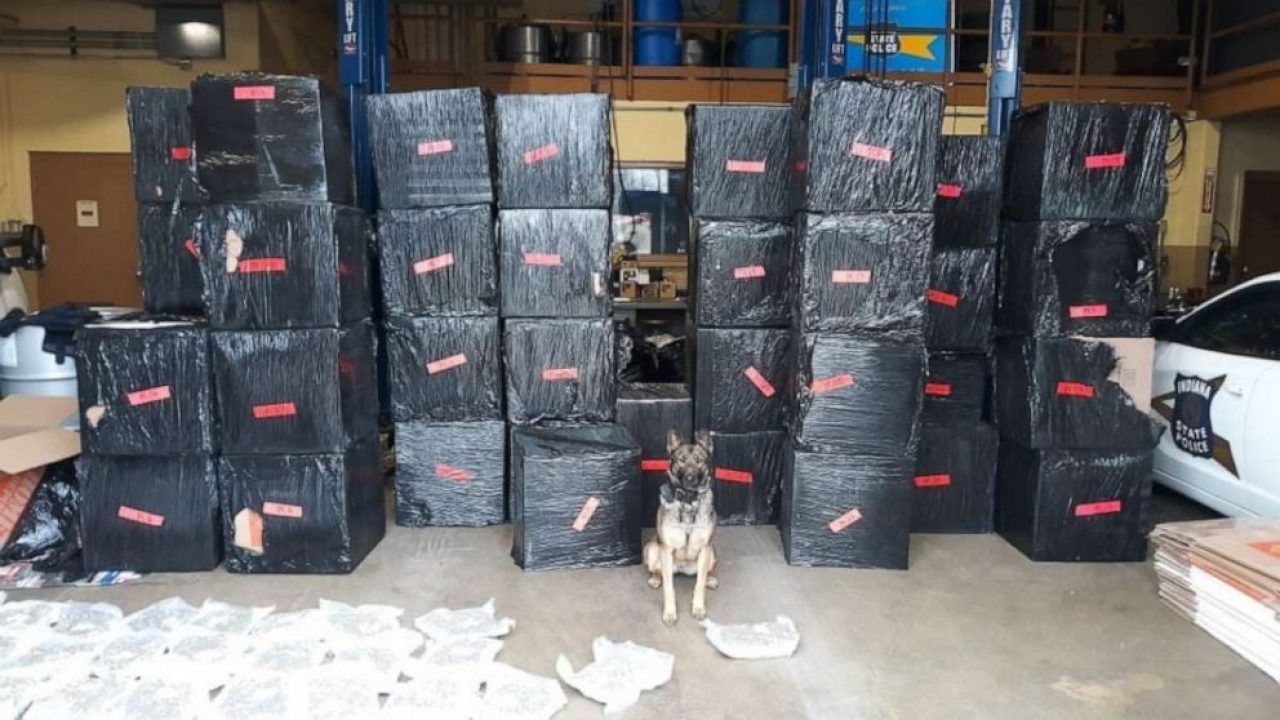 A recent, routine traffic stop just yielded an extreme amount of cannabis being discovered. More than half a ton of cannabis was found, with a street value of $8 million or possibly more.

Police dogs discovered the cannabis at a traffic stop this week in an unassuming area of northwest Indiana. This took place at 11:15 a.m. on the morning of Tuesday, March 16. A van was stopped near Lowell, Indiana, cited simply for a moving violation. Indiana State Police troopers instigated the stop, and the cannabis was then found by drug-sniffing police dogs.

This happened about 50 miles from Chicago, and because both recreational and medical cannabis are now legal in Illinois, Indiana police are likely cracking down.

When the stop took place, the officer approached the van to find Christopher S. Colburn, a 31-year-old from McKinleyville, California, in the vehicle. He then investigated the exterior of the van with the help of a canine, prompting the office to ask for a look inside. It is still not clear what exactly it was that tipped the officer off.

“During that search, troopers discovered 38 large boxes and 6 black garbage bags.,” said the Indiana State Police in an official statement about the search and seizure. “The boxes were wrapped in black, plastic wrap. Inside, the boxes contained a total of 1,264, individually sealed bags, each weighing approximately 1.5 lbs., and contained a green plant material. A field test of the content revealed it to be marijuana.”

Probable Cause For A Search

In terms of how cannabis was discovered in the car, Indiana still allows police to call in drug dogs if there is a cannabis smell or sighting.

“Typically, in order to search a person or place, the police need a warrant,” explains a law blog from Indiana. “However, there are exceptions to the warrant requirement. One of those exceptions is the plain view exception, and an extension of that, the plain smell exception.”

“What this means is that if a police officer stops your car and smells the odor of marijuana, the officer has probable cause to believe there is marijuana in the car and they can search the car and containers within that car for marijuana. Additionally, if the officer finds evidence of another crime in plain view during this search, that evidence may be used, as well.”

Not only is this a whole lot of cannabis, but it is worth a whole lot of money. According to experts who reviewed the cannabis seized, a conservative estimate of the street value lies in the millions.

Colburn was immediately arrested and taken to Lake County Jail. His preliminary charges include dealing cannabis, which is still a Level 5 felony, and possession of cannabis with a prior conviction, a Level 6 felony in Indiana.

It still isn’t clear why exactly the stop happened, or whether Colburn had other connections tying him to the cannabis community, legal or otherwise.