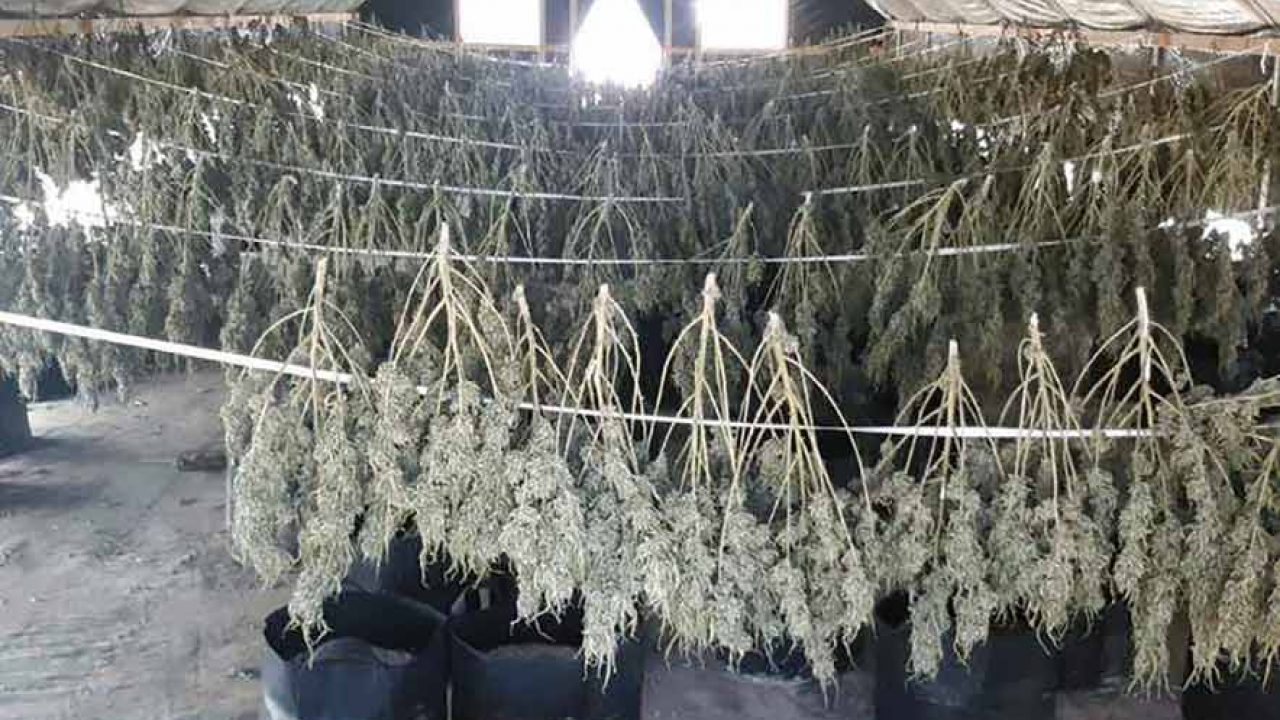 Courtesy photo | Navajo Nation EPA
Hemp plants hang upside down to dry in a hoop house on one of Dineh Benally’s farms in this file photo.

The Navajo Nation filed a lawsuit today in the Shiprock District Court against 33 farmers who it says are growing hemp and/or marijuana in violation of Navajo law.

This is the second lawsuit the Navajo Nation has brought to stop hemp and/or marijuana operations, having originally sued Dineh Benally and two of his unregistered companies in June.

The Nation alleges that these farmers possess or control Navajo lands that are being used to illegally grow, produce, manufacture, transport, or sell industrial hemp and/or marijuana. These actions, according to the lawsuit, are irreparably injuring and contaminating the Nation’s lands, waters, and other natural resources.

“Despite legislation that clearly illegalizes hemp and marijuana on the Navajo Nation, many farmers have chosen to jeopardize their farms and the health of the community by growing and producing hemp and marijuana for personal gain,” said Attorney General Doreen McPaul. “These individuals have substantially injured the community and the Nation, as a whole, by illegally drilling wells to water their hemp and marijuana plants, by illegally dumping and burying solid waste, by carelessly storing and applying hazardous pesticides on their lands, and installing ill-constructed septic tanks that are leaking sewage into our lands and groundwater.”

Benally had 36 farms operating in the Northern Agency, and a few that are reportedly still operating. On Sept. 18, the Shiprock District Court issued a temporary restraining order and preliminary injunction enjoining Benally and his “officers, agents, servants, employees and those persons in active concert or participation with” Benally from growing or cultivating hemp on the Navajo Nation.

But even with Navajo Police Department working around the clock to enforce the injunction, individuals continue to grow cannabis, neighbors and police report. On Oct. 7, Charles Galbraith, Navajo Nation special counsel, submitted an amended motion to enforce the preliminary injunction and temporary restraining order on Benally because of the San Juan River Farm Board president’s alleged continuing operation of farms.

“Indeed the daily defiance of this Court’s Temporary Restraining Order and Preliminary Injunction continue to overwhelm law enforcement and are in fact just a continuation of Defendant’s demonstrated complete lack of respect for the laws of the Navajo Nation,” stated the amended motion.

Today a hearing on an order to show cause took another unlucky turn for the Navajo Nation, and has given Benally an extra 10 days to continue with what remains of his farming endeavor. Benally and his attorney David Jordan filed a motion to dismiss the day before the hearing. The Nation did not have enough time to respond this motion of dismissal. Shiprock District Court judge Genevieve Woody gave Galbraith and Navajo Department of Justice 10 days to respond.

Also,  on Oct. 21, 132 vacuum-sealed bags of cannabis were confiscated from a hemp farm on 5th Lane in Shiprock after calls were received on the hemp hotline stating workers were cutting down the plants. Responding officers saw the workers were in violation of the court order and arrested a security guard and the property owner.

The Navajo Nation Department of Justice, the Office of the Prosecutor, the Navajo Nation Environmental Protection Agency, and the Navajo Police Department will provide an update on various hemp-related matters at the outdoor patio area of the San Juan Chapter House at 10 a.m. Friday.  Masks, social (physical) distancing, and other applicable public health requirements will be strictly enforced.