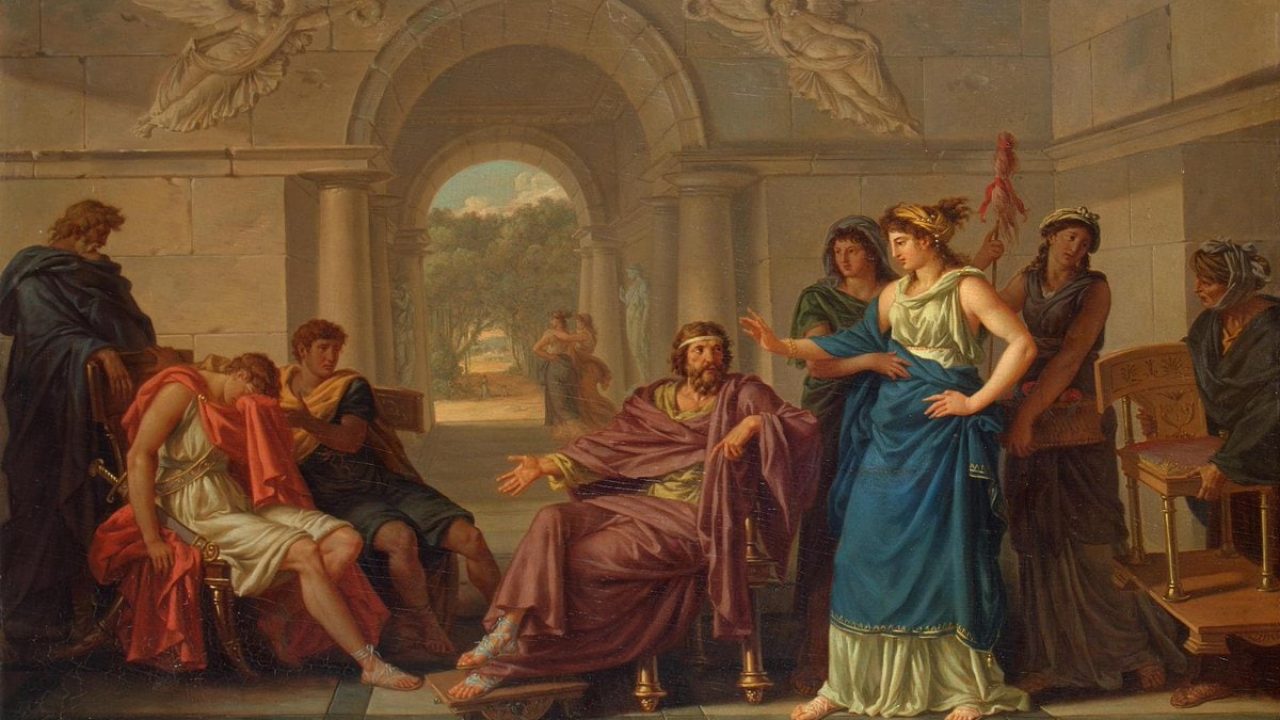 CANNABIS CULTURE –  Nepenthe was an ancient herbal infused wine, that appears in Homer’s famous tale The Odyssey. Its use to quell grief in a funerary setting has caused many researchers to identify it with cannabis.

The Odyssey of Homer (9th-8th century BC) describes the Nepenthes which came to the Greeks from Egyptian Thebes:

“Then Helen, daughter of Zeus… cast a drug into the wine whereof they drank, a drug to lull all pain and anger, and bring forgetfullness of every sorrow. Whoso should drink a draught thereof, when it is mingled in the bowl, on that day he would let no tear fall down his cheeks, not though his mother and his father died, not though men slew his brother or dear son with the sword before his face, and his own eyes beheld it. Medicines of such virtue and so helpful had the daughter of Zeus, which Polydamna, the wife of Thon, had given her, a woman of Egypt, where earth the grain-giver yields herbs in greatest plenty, many that are healing in the cup, and many baneful. There each man is a leech skilled beyond all human kind…”

The historian Diodorus Siculus, who lived in the 1st century B.C., noted that still in his time, more than 7 centuries after the composition of Homer’s Iliad, “people say that the Egyptian women make use of the powder (of this plant, scil. the nepenthes) and they say from ancient times only those women who lived in the ‘Town-of-Zeus’ [i.e. Thebes, which was also known as Diospolis] had found medicines which cure wrath and grief” (1, 97, 1-9; Eus. PE 10, 8, 9-12; cf. also Ps.Iustinus, Cohort. ad gent. 26e).

As Prof Carl Ruck has noted “It is generally assumed that the drug, which Helen is supposed to have learned in Egypt, was opium, but the effects as described in the poem are much more like Cannabis, which was also widely employed in Egypt and throughout the Near East” (Ruck, et al., 2007). Numerous researchers have seen nepenthe as a cannabis concoction. An idea first put forth by the French Pharmacist Joseph Virey (1775—1846) who suggested in 1813 that hasheesh was Homer’s nepenthe (Bulletin de Pharmacie). Many others have since concurred: “The opinions entertained by the learned, on the nature of the Nepenthe of the ancients have been various. By Th. Zwinger, and… by Sprengel, in his history of botany, it is supposed to be opium… But the best authorities, with whom our author coincides, are of opinion that the Nepenthe was derived from the Cannabis sativa of Linnaeus” (Christen, 1822); “the famous nepenthe of the ancients is said to have been prepared by decocting the hemp leaves” (Watt, 1853); “nepenthe which may reasonably be surmised was bhang from the far east” (Benjamin, 1880). As the authors of The Manners and Customs of the Ancient Egyptians also concluded: “Nepenthes… Perhaps the Bust or Hasheesh, a preparation of the Cannabis sativa” (Wilkinson & Birch, 1878). See also (Walton, 1938; Burton, 1894; Lewin, 1931; Singer and Underwood, 1962; Oursler, 1968; Wills, 1998). It is clearly the Nepenthe that Prof Richard Evans Schultes and Prof. Albert Hofmann are referring to when they wrote in a chapter on cannabis “In ancient Thebes the plant was made into a drink with opium like effects” (Schultes & Hofmann, 1979).

Coptic amphorae from Sˇaruma, which held black organic residues inside containing the pollen of cannabis.

In A Glossary of Colloquial Anglo-Indian Words and Phrases, Yule and Crooke note an interesting connection between a Coptic (Greek-Egyptian) term and the nepenthe; “Bhang is usually derived from Skt. Bhanga, ‘breaking,’ but [Sir Richard] Burton derives both it and the Ar. Banj from the old Coptic Nibanj, ‘meaning a preparation of hemp; and here it is easy to recognize the Homeric Nepenthe’” (Yule, et al., 1903/1996). As Abram Smythe Palmer also notes in Folk-etymology: “Nepenthe, the drug which Helen brought from Egypt, is without doubt the Coptic nibendj, which is the plural of bendj, or benj, hemp, ‘bang,’ used as an intoxicant” (Palmer, 1882). When one returns to the contemporary Avestan term for cannabis, b’aŋ’ha, the similarity in this context, ne- b’aŋ’ha, brings us to an even closer to the cognate pronunciation ‘nepenthe.’

One can also note a similarity to the Indian term ‘panga,’ which refers to a paste made from pounded cannabis leaves mixed with water (Watt, 1908). (It should be noted that by the time the pyramids were built, there had already been large cities in India’s Mohenjodaran-Harappan in India, [geographically close to Mesopotamia and Scythian southwest Asia], for some centuries). The Hebrew term ‘pannag,’ which Dr. Raphael Mechoulam believes identifies a preparation of cannabis (Mechoulam, et al., 1991) is also similiar. Interestingly, as nepenthe was a powder it is notable that both of these terms are believed to identify prepared forms of cannabis as well.

“At this place the Institute of Egyptology of the University of Tubingen is excavating a graveyard which was used from the 6th Dynasty until the Roman period… Here some wine amphorae were excavated, from the bottom of which we obtained samples of organic material for pollen analytical investigations…. The useful plants, Cerealia and Humulus/Cannabis were present.” (Rosch, 2004)

However it should be noted that the samples isolated in the “black organic residues inside containing pollen” found at the bottom of the amphora, may just indicate what was growing in the area, and represent things caught in the air, so at this point not conclusive evidence of an Egyptian cannabis infused wine. “Bearing in mind the low pollen concentration and the composition with a high amount of airborne pollen, we suppose that a large part of the pollen content reflects contamination of the amphora during its filling or opening.”