Plugging data gaps around use of hemp in feed 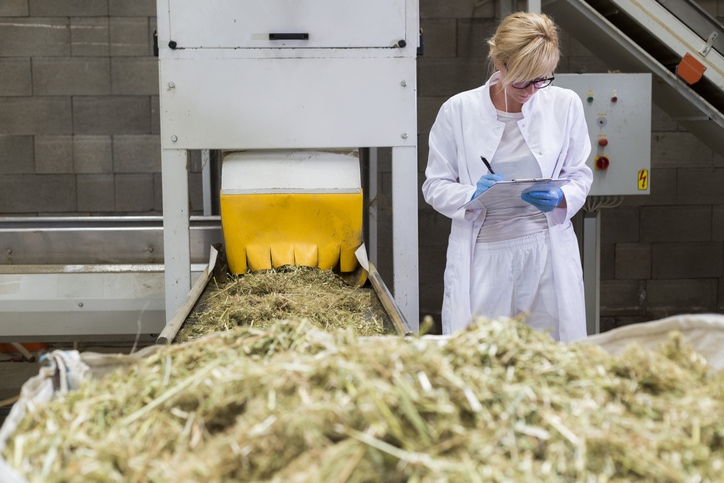 The multidisciplinary research team, consisting of pharmacologists, toxicologists, analytical chemists and horticulture experts, carried out two separate studies around hemp as feed.
In one, they evaluated the nutrient composition and cannabinoid concentration of different parts of the hemp plant. In another, they looked to establish what the concentrations of cannabinoids were in livestock after exposure to IH.
The hemp used in their work was grown at K-State’s John C Pair Horticultural Center.
The 2018 US Farm bill saw recognition for hemp, as an agricultural commodity. While interest has grown in industrial hemp as feed for animals, FDA approval, through the Association of American Feed Control Officials (AAFCO), would be required before hemp could be fed to livestock or pets.
“Although hemp can be legally cultivated under license in Kansas, feeding hemp products to livestock remains prohibited because the potential for cannabinoid drug residues to accumulate in meat and milk has not been studied,”​ said one of the researchers, Hans Coetzee, professor and head of the anatomy and physiology department, the College of Veterinary Medicine, K-State.text-ad​
In the study examining the nutritional and cannabinoid concentrations​​ in the ration, the team said they analyzed various IH samples including whole industrial hemp plants (no roots), stalks remaining after seed harvesting, unprocessed female flowers intended for cannabinoid extraction, whole seed heads for seed production, leaves obtained from the drying process, chaff obtained after seed harvesting and cleaning, and processed female flowers after cannabinoid extraction.
Plant materials were submitted for nutrient concentration and digestibility analysis, and for cannabinoid concentration determination, to a commercial nutrition laboratory.
The researchers found that dry matter of the plant material ranged from 65 to 96.6%. Crude protein ranged from 5.3 to 24.5%. Calcium concentration was from 1.0 to 5.7% DM. The plants tested had high fiber concentrations, with NDF ranging from 28 to 80% and ADF ranging from 18 to 65% DM.
They saw that total digestible nutrients was 19.8 to 61.5. Six of the 10 cannabinoids tested were detected in all samples.
Cannabinoids absorption ​In the other study,​​ the team set out to characterize the plasma pharmacokinetics (PK) of cannabinoids and their metabolites in cattle after a single oral exposure to IH.
They outlined how eight castrated male Holstein calves received a single oral dose of 35g of IH to achieve a target dose of 5.4 mg/kg cannabidiolic acid (CBDA).
Blood samples were collected for 96 hours after dosing. Plasma cannabinoid concentrations were profiled using liquid chromatography coupled with mass-spectroscopy (UPLC) and PK parameters were calculated using noncompartmental methods, said the scientists.
The cannabinoids CBDA, tetrahydrocannabinolic acid-A (THCA-A), cannabidivarinic acid (CBDVA), and cannabichromenic acid (CBCA) were detected in all cattle after IH dosing, reported the researchers.
They said their results showed that acidic cannabinoids, especially CBDA, are readily absorbed from the rumen and available for distribution throughout the body, and that acidic cannabinoids, such as CBDA and THCA, are more readily absorbed from the rumen than other nonacid cannabinoid forms, such as CBD and CBG.
Milk and tissue residues Michael Kleinhenz, assistant professor of beef production medicine, K-State, part of the research team, commented. “Now that we have found that some cannabinoids are readily absorbed from the rumen, the next steps are to study the tissue and milk residue depletion profiles of these compounds after animal feeding experiments. The effects of cannabinoids on cattle are also unknown.”​
Follow-up experiments will include pilot studies to examine the effect of feeding hemp on animal behavior and immune function, he said.
“Until feedstuffs containing hemp are established as safe in animals, our data will assist producers in managing situations involving intentional or unintentional hemp exposures,” ​said Kleinhenz.
Lack of US research around feed hemp ​Canadian Veterinary Health Products recently set a limit of less than 10ppm of total cannabinoids for animal feeds and the US industry and policy stakeholder group, the Hemp Feed Coalition (HFC), told us in April this year​​ that it was recommending the same threshold.
At the stage, the HFC was in the process of submitting a dossier to the FDA-Center for Veterinary Medicine (CVM) to get approval for the use of hemp seed, meal and cake as protein supplements for use in the diets of layers and broiler chickens.
Hunter Buffington, program director, HFC, said then that one of the biggest challenges currently around hemp legislation is the lack of research conducted in the US.
“While other countries never stopped feeding it, we have to prove the nutritional profile using American grown and processed hemp and then use published research (when it is available) and work with feed and species experts to create the protocols and methods to conduct the safety and efficacy feed trials in the US.​
“We also determine a suggested inclusion rate for each species along the intended use of the ingredient​.”