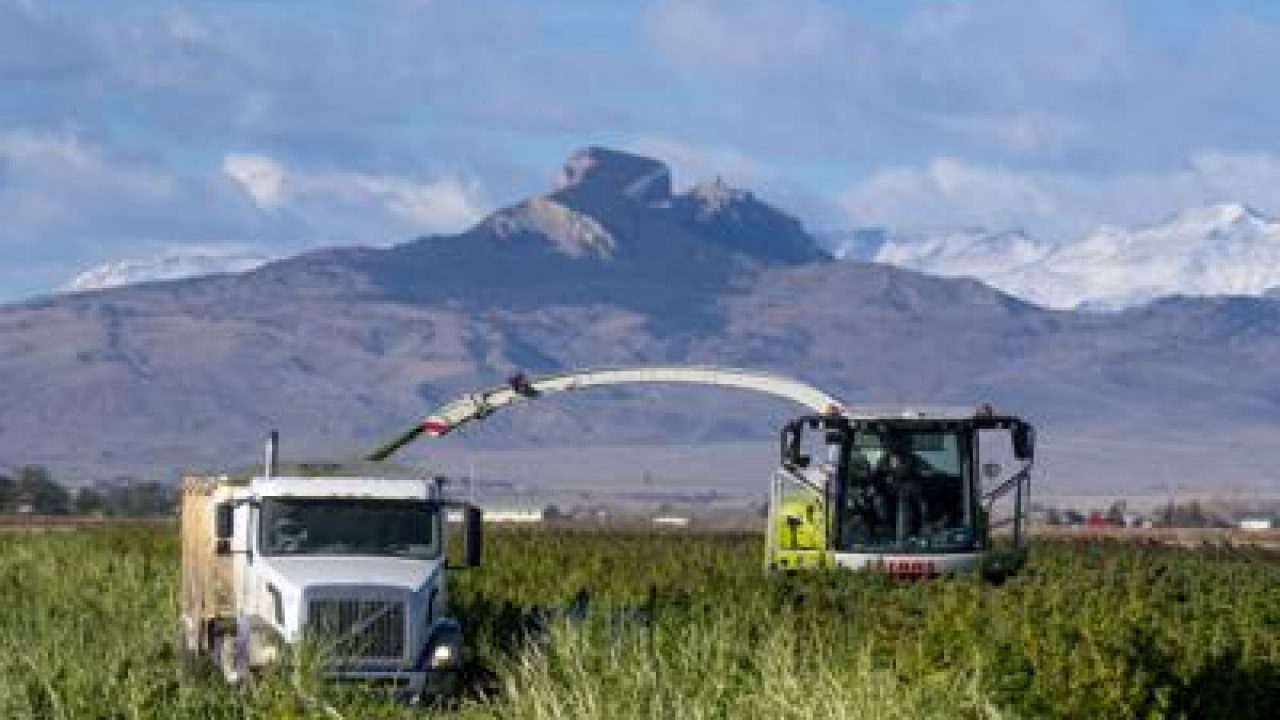 The Powell area’s first hemp crop produced about 190 tons of hemp, averaging about 5 tons per acre.
Two fields were planted in June, one near Deaver and the other near Powell, totaling about 137 acres according to Mother’s Hemp Farms owner Dale Tenhulzen. However, the crop grown on the 107 acres in Deaver had to be destroyed.
“It came in too hot,” said field manager Terry O’Neill.

Regulations require that any hemp produced under licenses from the Wyoming Department of Agriculture maintain a THC level no greater than 0.3%. The chemical is the main psychoactive ingredient in marijuana. If the plant tests higher than that, the entire crop is lost.
“It would have been an excellent harvest,” O’Neill said of the destroyed Deaver field.
Fortunately, the crop outside of Powell tested within the limit and was able to be harvested. From that field, O’Neill said they harvested 197 bales weighing about 1,800 to 2,000 pounds each.
Mother’s Hemp Farms is shipping the bales to South Carolina, where the hemp will be processed for CBD, a non-psychoactive chemical in hemp that consumers believe has medicinal value. It is currently one of the more profitable uses of hemp.
However, Wyoming Hemp Association President Justin Loeffler told state lawmakers in August that the market for hemp-derived CBD products had become oversaturated. As an example, he said some 117,000 acres of hemp were planted for CBD production last year, while U.S. processors were only able to handle 22,000 acres-worth.
“Right now there is a lot of 2019 crop that still has not been extracted into oil or made into products, which is allowing for a lot of cheap biomass being bought — and the market just hasn’t recovered,” Loeffler told the Legislature’s Joint Agriculture Committee on Aug. 27, adding, “on the CBD level, we’re still seeing this as more of a boutique or bougie crop that people are going to be able to grow on small acreages.”
Loeffler said he sees the most potential for Wyoming hemp in fiber products.
Tenhulzen said in June that, since marijuana remains illegal in Wyoming, it’s an attractive place for growing hemp for CBD. In other states, cross pollination from marijuana fields is a constant threat to CBD crops, and the fields need to be separated by miles.

Shipping hemp across state lines has been a problem, with numerous cases of law enforcement agencies seizing hemp shipments on the suspicion they’re marijuana. O’Neill said he contacted all the transportation departments in the states the shipment will pass through to make sure the company wouldn’t have any problems. The officials in other states told him that, as long as they could produce the lab results showing it was under the 0.3% THC threshold, they wouldn’t have a problem.
Wyoming Department of Agriculture Director Doug Miyamoto had reported some issues with THC compliance during August’s legislative meeting. He said two unnamed growers — one in the Big Horn Basin and one in Lincoln County — had crops that came in over the 0.3% threshold. The highest level the department had seen was 1.1% and he specifically referenced a crop that had tested at 0.64%.
“That’s still not a high level of THC concentration, but it’s over the standard,” the director said. For comparison, the THC content in some strains of marijuana can top 15% — 50 times higher than the limit on hemp.
Tough weather conditions that stress plants, such as the drought seen this summer in Wyoming, tend to drive up THC levels in cannabis plants, Miyamoto added. Regardless of the reason, the state has no authority to deviate from the 0.3% standard set by the 2018 U.S. Farm Bill, which means noncompliant crops must be destroyed.
“That’s something that I don’t like very much and … I really don’t want to plow people’s crop’s under; I have no interest in doing that,” Miyamoto said. “But then by the same token, because hemp is regulated at the federal level, I don’t have any latitude. I don’t have anything akin to prosecutorial discretion where I can decide what I’m going to do with these crops.”
Loeffler said the industry is working to gather data on which varieties of hemp will grow the best in Wyoming, suggesting that cultivars from Oregon and Colorado may wind up producing too much THC in this climate.
“… we are a very great climate for growing hemp,” he said. Particularly with the state’s clean headwaters, “that puts us on the map to be able to produce this at a really, really high level and high quality,” Loeffler said. “But we have to do our due diligence first.”
Across the state, the Department of Agriculture had issued 27 licenses for the 2020 growing season as of August, covering about 1,010 acres of open ground and 18,200 square feet of greenhouse operations.
Despite the loss of Mother Hemp Farms’ plants near Deaver, O’Neill said it was an overall success for a first-year crop in an emerging industry. He thinks the future of hemp in Wyoming looks promising.
“Hopefully this gets more farmers psyched,” O’Neill said. “This shows that hemp is definitely something to pay attention to.”