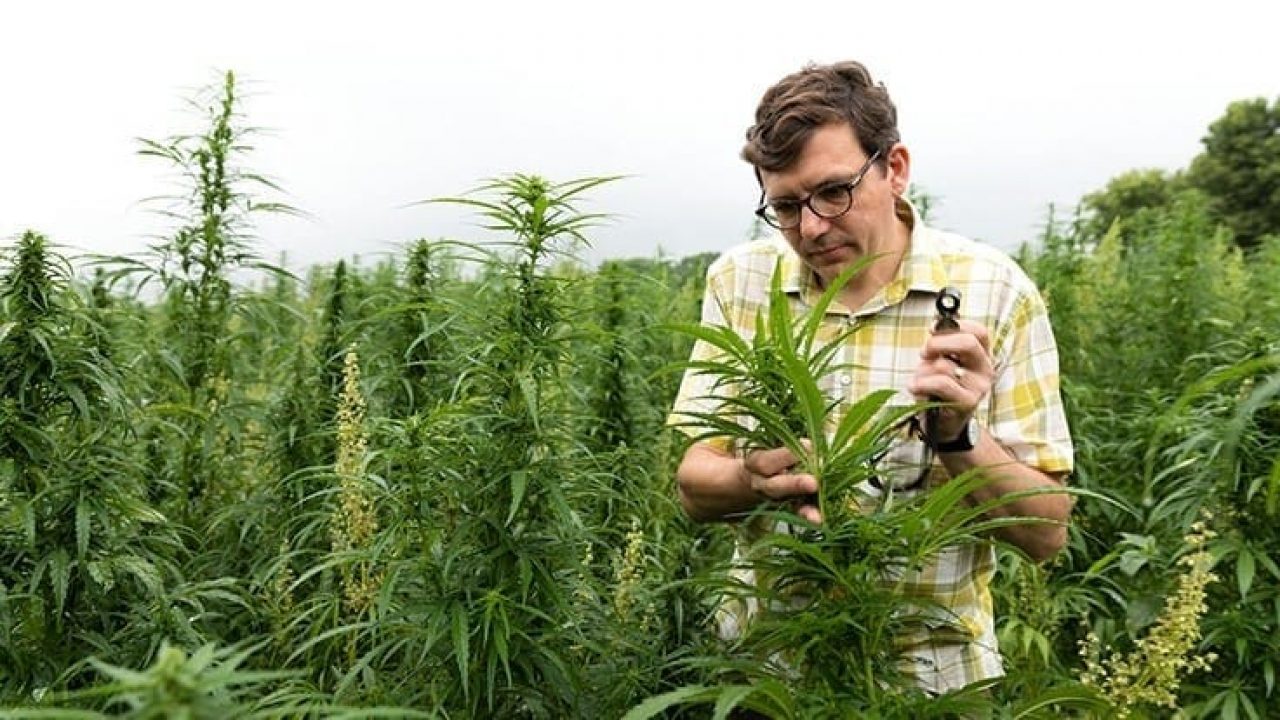 George Weiblen, a professor in the College of Biological Sciences at the University of Minnesota and the science director and curator of plants at the Bell Museum, has been working since 2002 to discover the genetic differences between hemp and marijuana.
He’s recently cracked a major component of the code.
A research team led by the Weiblen Lab has developed a genetic test that can predict whether cannabis will produce mostly cannabidiol (CBD) or tetrahydrocannabinol (THC), having broad implications for both cannabis and hemp industries.
The team’s findings were recently published in the American Journal of Botany.
While Weiblen acknowledges that other similar tests have been developed, the University of Minnesota’s research and test delve deeper into the biology and mechanisms behind why the test works. In other words, they’ve discovered on the molecular level why certain cannabis varieties produce more CBD and why others produce more THC.
“We are looking at the genes that are ultimately responsible for the pattern we see,” Weiblen tells Cannabis Business Times and Hemp Grower. “What we’ve done is proven our model across lots of different kinds of cannabis, from industrial hemp to medicinal cannabis to feral ditchweed [wild hemp].”
How it Works
Weiblen says across all types of cannabis, a small area of their chromosomes determines whether the plant will be one of three types: CBD-dominant, THC-dominant or intermediate with approximately equal levels of each.
The team found these consistencies by studying more than 350 different samples of cannabis. (The Weiblen Lab has a DEA research registration and obtained drug cannabis from the National Institute on Drug Abuse.)
The lab test developed by the research team homes in on one gene: the gene for CBD. This gene has two variations that result in it either producing CBD or failing to produce CBD, Weiblen says. Those variations are different sizes on the chromosome, so the test measures the length of the gene to determine which variation it is.
“Just like in humans, where we have two copies of each chromosome, so does cannabis,” Weiblen says. “As a plant, you can either have two working copies of the CBD gene, two faulty copies of the CBD gene, or one of each. How much CBD [the plant makes] depends on which of those three combinations you have.”
It’s much like hair types for humans. For example, if a mother has curly hair and a father has straight hair, their child’s hair could be either curly, straight or something in between.
Interestingly, Weiblen’s team also found the gene for THC is tied to the gene for CBD, and the two interplay to produce the three different types of cannabis.
A Surprising Discovery
During the team’s research, they studied feral hemp populations across Minnesota. And while a majority of those samples met the legal definition of hemp at 0.3% THC or less, others were more complex.
In an unexpected finding, Weiblen discovered that roughly one in 10 feral hemp plants in Minnesota had potential to exceed the legal definition of hemp at maturity. They found 11% of their samples were intermediate-type cannabis, while 1% was THC-type.
“We found a marijuana needle in the hemp haystack,” Weiblen says.
It’s important to note that the amount of cannabinoids cannabis produces is a different story. Even if cannabis is THC-type, it could still potentially produce so few cannabinoids that it remains within compliance of the federal definition of hemp. While “the ratio of cannabinoids is entirely a genetic phenomenon,” Weiblen says, different environmental factors have been shown to dictate how much cannabinoid content cannabis actually produces.
Still, this finding raised questions for Weiblen, especially as many hemp growers and all cannabis growers are looking to not only produce cannabinoids, but also maximize them.
As such, the researchers have suggested changing the definitions of “hemp” and “marijuana” to align with their findings—instead of defining different cannabis varieties by the amount of cannabinoids they produce, which is reliant on outside factors and can vary wildly, the researchers propose defining them by their cannabinoid “types.”
“As a botanist, we don’t classify plants based on how people use them, but how they differ [genetically],” Weiblen says, adding that the definitions of hemp and marijuana carry both confusion and, in some case, negative connotations. “Now that we see public policy and public perceptions around cannabis really changing, we suggest maybe it’s time to define types of cannabis around their cannabinoid content rather than carry with us all the historical baggage.”
“We found a marijuana needle in the hemp haystack.” -George Weiblen, professor, University of Minnesota Implications for the Hemp Industry
Beyond public policy implications, the research team’s findings could also make it easier for cannabinoid producers to choose their genetics—an improvement that is sorely needed in the nascent hemp industry especially.

Some hemp farmers are still having difficulty with hot crops that exceed the federal THC limit. This has been due, in part, to troubles sourcing reliable genetics.

“One advantage of our test if it’s applied is that it can give farmers some assurance of what is the predominant cannabinoid they’re going to see in their plants,” Weiblen says. “They don’t have to wait until end of growing season to learn that.”