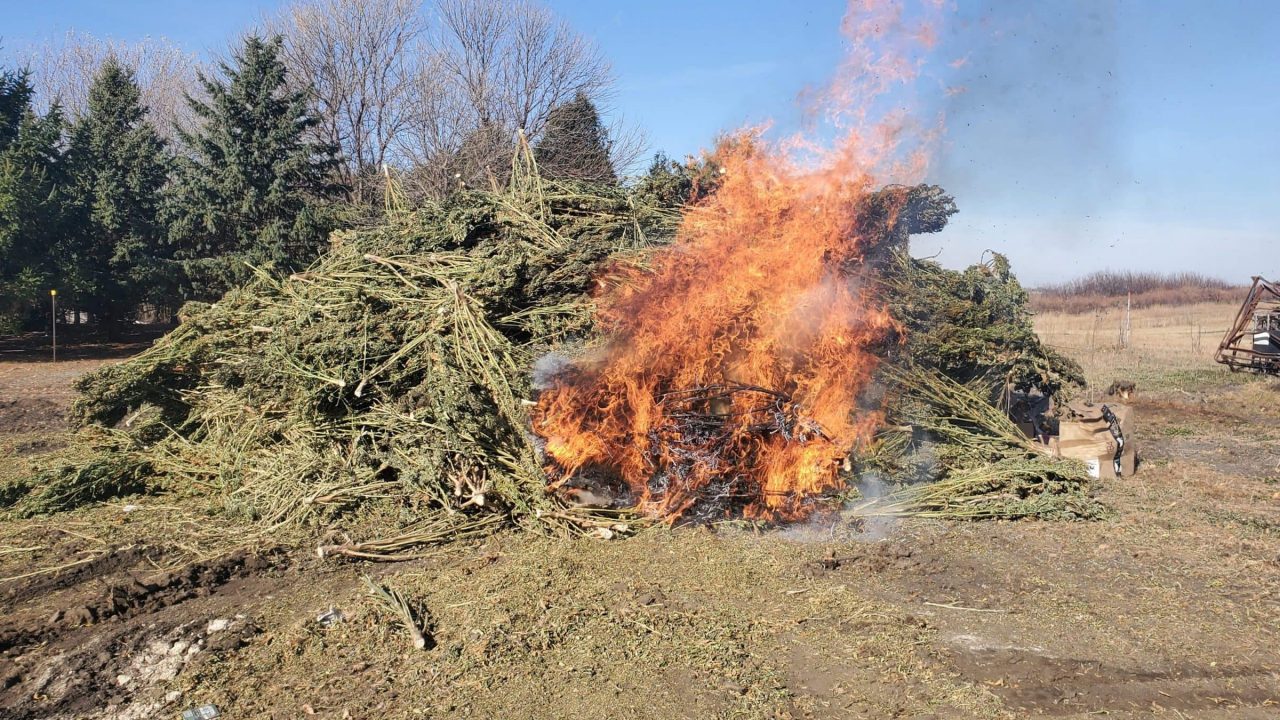 DES MOINES, Iowa – Jay Kata’s first hemp crop went up in smoke.
The plants grown by him and his farming partners in southeast Iowa were mowed down, windrowed – then set ablaze.
What remained was tilled under after the field became “too hot”: The level of THC (tetrahydrocannabinol, the psychoactive compound in cannabis plants like hemp) exceeded state and federal limits.
“It was pretty heartbreaking,” said Kata, who was among nearly 90 Iowans this year who set out to produce the state’s first government-authorized crop of hemp, a close relative of marijuana.
Iowa farmers planted hemp on about 680 acres (over 1 square mile) this year, according to the Iowa Department of Agriculture. Growers are hoping to cash in on a burgeoning market for hemp-derived cannabidiols, or CBD. The non-psychoactive compound is being added to everything from sparkling water and chocolates to body creams and dog treats with the promise that it can relieve a host of maladies.

It’s a $5 billion market that is forecast to grow rapidly over the next few years. But keeping hemp’s THC levels within the legal limit was just one of a host of hurdles Iowa’s initial batch of growers discovered – from backbreaking hand-weeding and harvesting to battling insects and trying to sell their crop in an oversaturated market.
Still, Clear Lake farmer Greg Nicholas, one of the new hemp growers, said the experiment was exhilarating.
“It was fun learning about a new crop… There was just a lot more to it than we thought,” said Nicholas, who sees hemp as a way to begin diversifying the state’s 22.3 million acres (over 34,800 square miles) of corn and soybeans.

The state says it’s difficult to determine exactly how much hemp was harvested since farmers could grow a varying number of plants on each acre.
About 13% of Iowa farmers’ hemp fields had to be fully or partially destroyed because the THC levels in the plants exceeded 0.3%, the maximum allowed under state and federal laws.
Kata said he believes the THC levels in his 2 acres of plants spiked because they became stressed, fighting against weeds for sunlight and nutrients. Testing showed THC levels were nearly three times the allowed limit, he said.
“It was a pretty big letdown,” said Kata, an entrepreneur who worked with two farmers and another investor to grow the crop. The four will regroup to decide if they should try again next year.
More:How a Colorado-based CBD brand ensures its ingredients are of high quality
Wisconsin:This Milwaukee company rolls thousands of CBD joints every day and is bringing in millions
‘Disheartening at times’The work required to keep weeds down was one of the biggest challenges, hemp growers said.
“Everything grows well in Iowa soils,” including the weeds, Kata said.
Unlike corn and soybeans, no herbicide is certified to control weeds in hemp fields. Nicholas said he and his family spent several hours every day hand-weeding 15 acres of hemp, despite trying several mechanical approaches.
Sometimes the field “was a carpet of weeds,” said Nicholas, who crawled on his hands and knees to find the hemp among the weeds so the person behind him could hoe around it and not dig the plants up.
“It was disheartening at times,” Nicholas said. “I’d put (my) head down and focus on 5 feet in front of me, then worry about the next 5 feet. If you looked up, you’d get overwhelmed pretty quickly.”
Kata said he and his partners also spent several hours a day weeding their crop. At one point, they hired a crew to finish weeding the field. It took 40 men two days to do the work.
“We just couldn’t keep up,” Kata said.
Brian Portwood, who farms in eastern Iowa, battled with weeds as well as pests. He hand-sprayed 600 plants on a half-acre twice a week with a pesticide and nutrients until the plants began flowering.
“It was an incredible amount of labor,” said Portwood, adding that it took 10 people two weeks to hand-harvest the crop.
Portwood and his crew grew hemp seedlings and replanted them in the fields mostly by hand, and he pruned some of the plants’ leaves so they wouldn’t compete with the buds, which contain the CBD, for nutrients. After harvest, his team had to hang the plants to dry them, then separated the buds before storing them.
“I anticipated some of the work, but nothing like it actually was,” he said.

Nicholas harvested with a stripper header that farmers use to pull kernels from wheat plants. He also bought a drying system from an Iowa company specially designed for a cannabis crop. He has a contract with a Colorado company that will use the cannabidiols in consumer goods, such as creams and tinctures.
Portwood has yet to sell his hemp crop, something he will focus on after he wraps up harvesting his corn crop, which was damaged by the derecho that swept through Iowa in August.
He said he will decide if growing the hemp was worth the work “once I have a check in my hand.”
Earlier:Iowa farmers will be able to grow, harvest hemp, ag secretary says. But will they get paid for it?
Farmers struggle to find marketsOne of the biggest challenges that Iowa hemp growers have experienced is finding buyers for their crop, said Robin Pruisner, Iowa’s state entomologist and hemp administrator.
Despite the growing demand for CBD products, Hemp Benchmarks, an industry pricing report, shows prices for most hemp products have fallen 20% to 80% over the past year. Pruisner said the market has seen a glut of products after Congress legalized production in 2018.
Nicholas said he’s heard horror stories about farmers who have been stuck with harvests from two or three years ago.
“We decided we wouldn’t put a seed in the ground until we had a contract or a buyer,” he said.
Nicholas’ crop is still being assessed for its CBD properties, but he anticipates he will at least break even on it.
Nicholas, Kata and Portwood hope the fledgling hemp market will eventually generate enough demand that Iowa corn and soybeans growers could consider adding it as a third crop. Prices for the traditional row crops have fallen in recent years, while production costs have climbed.

“Farming is getting more and more challenging,” said Nicholas, who farms with his father. “It’s been difficult to make a living.”
If the hemp markets get stronger, Portwood said, he feels his first year will help him. “I’ll at least have some experience and be ahead of the game,” he said.
A new state law this year will allow for the production and sale of consumable goods made with hemp in Iowa, a move that growers say could increase the market for their crop.
Nicholas sees the new law opening the door for businesses and jobs. ”If we can grow it, we should be able to process it,” he said.
Nicholas and Kata would like to see the federal government – and the states that match its program – increase the amount of THC that hemp plants can contain, so farmers aren’t at risk of having their crops destroyed.
Nicholas said he worried this year that his fields might “go hot.”
“If we would have been required to destroy it, it would have been devastating. Absolutely devastating,” he said.
Pruisner encourages hemp farmers to have their crops privately tested to prevent THC levels from rising beyond the maximum allowed. The state tests fields before farmers harvest them to ensure they’re within the required limit.
The state performed 119 initial tests on hemp fields and 103 passed; 16 fields failed and were fully or partially destroyed.
Seed varieties, growing conditions and soil types, among other factors, can result in wide differences in when hemp should be harvested to remain under the required THC level, Pruisner said.
More:How these 2 winemakers are moving into cannabis cultivation
Where weed is now legal:These states legalized recreational marijuana on Election Day
She said she sees support in the hemp industry for raising THC levels to 1%, an amount that is generally believed that consumers can ingest without getting a buzz.
Nicholas, who fielded questions all summer long about his family’s hemp field, hopes that more people become comfortable with hemp and the benefits it can provide.
Advocates say hemp has many of the therapeutic benefits that marijuana provides, without the high. Nicholas and his family use some of the hemp products from the company that is buying his crop.
“I think it will be very positive for everybody,” said the 36-year-old, who plans to grow hemp again next year. He sees the plant providing water and soil benefits when it becomes a third crop in the corn-soybean rotation.
“I hope if my kids decide to become farmers, that we’ll relax as a society and realize it’s not as scary as we’re making it out to be.”