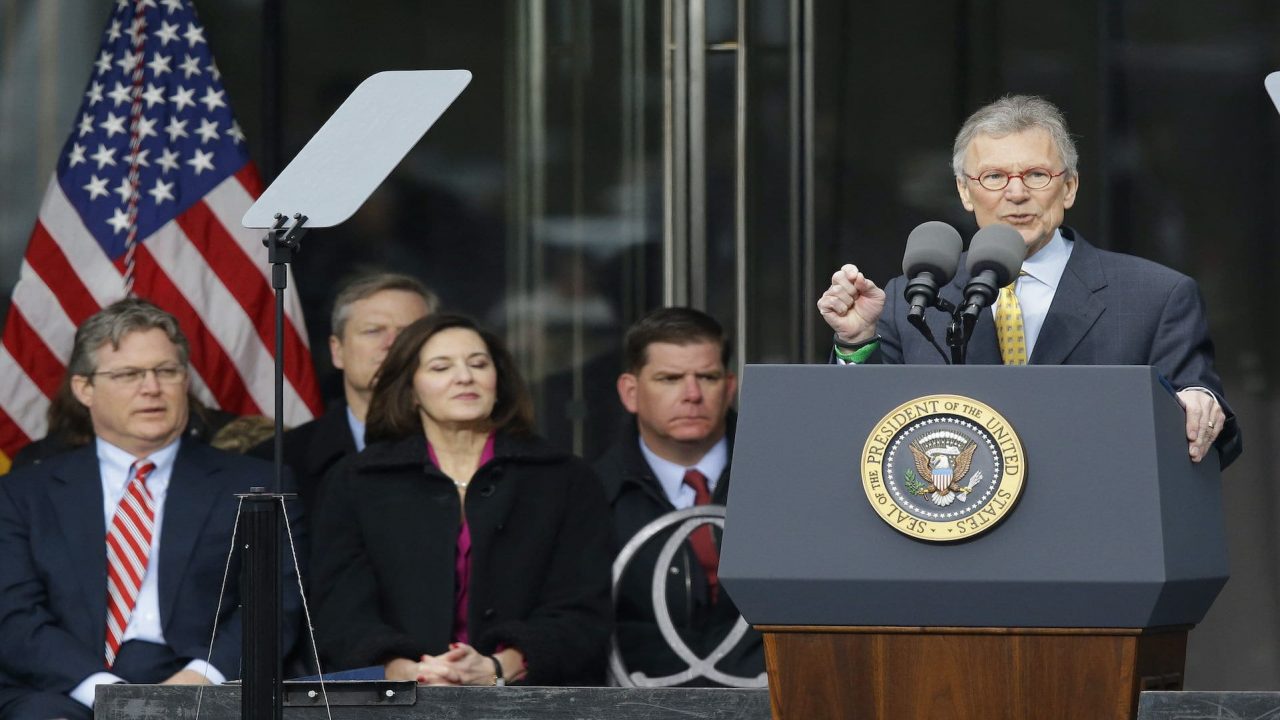 Of the four states where residents will be voting to legalize recreational cannabis next week, South Dakota may be the toughest nut to crack. Although a recent poll concluded that a razor-thin majority of residents support a constitutional amendment to legalize recreational cannabis in the state, the results are well within the margin of error. (A separate medical marijuana initiative is widely expected to pass.)

Advocates in the state are up against a deeply conservative legislature, and South Dakota’s governor, Kristi Noem (R), has made it clear that she completely opposes cannabis reform. Last year she even vetoed a hemp bill, claiming legalizing hemp “is part of a larger strategy to undermine enforcement of the drug laws and make legalized marijuana inevitable.”

Yet former Senate Majority Leader Tom Daschle (D) is optimistic that reform is within reach.

A recent convert to the legalization cause

A South Dakota native, Daschle represented his home state in the US House from 1979 to 1987, and then in the US Senate from 1987 to 2005. He served as Senate majority leader from 2001 to 2003. Daschle acknowledges he’s new to the cannabis reform movement.

“I did not advocate for legal marijuana while I served in the Senate,” he recently told the Argus Leader, “but, like many other Americans, my viewpoint has vastly evolved in recent years.”

Beyond his vocal support of both South Dakota legalization measures, he is now an active participant in the industry: Last year he joined the advisory board of Northern Swan, a New York-based cannabis investment firm.

Read on for Leafly’s exclusive interview with Sen. Daschle, in which the elder statesmen dives deep into the arguments for legalizing cannabis, the experiences that converted him to a cannabis believer, his unexpected partnership with Chuck Parkinson—the Reagan Administration official who launched the “Say No to Drugs” campaign—and more.

Tom Daschle on cannabis and the drug war

Leafly: So how did you end up on the board of an international cannabis investment firm?

Sen. Tom Daschle: Health care has been a very important part of my life for a long time. I spent a good deal of my 26 years in Congress working on health care issues. That really is what led me to the whole cannabis agenda, the realization that cannabis can contribute in a consequential way if we give it a chance, if we do the research, if we provide the legal infrastructure. It can be a significant contributor to improved health. We’ve already seen indications of that and there’s plenty of opportunity to explore far more.

I’m was curious whether your work at Northern Swan has informed your perspective on cannabis reform?

“My only regret is that I wasn’t more engaged and more informed at a much earlier stage in my life.” —Tom Daschle

I grew up with a mindset that was vastly different from the one I have today, in large measure because it was a different time and a time when we were trying to figure all this out.

We put cannabis on Schedule 1—I think mistakenly—and we’ve been dealing with all the consequences of that mistake for decades. That led me to become much more engaged today. My only regret is that I wasn’t more engaged and more informed at a much earlier stage in my life.

Was there a eureka moment for you on this issue?

I think one of the pivotal moments was to meet some of the families who have seen the medical advantages of cannabis already and given me their personal attestations to just how impactful it can be.

I’m a Vietnam-era veteran and served on the House and Senate Veterans Committees. Veterans in particular who have struggled with PTSD and so many other issues that are war-related have found real relief [with cannabis].

While it’s anecdotal and not completely researched as I know someday it will be, I do believe that there is an enormous health implication here. If there was a eureka moment for me, that was part of it.

South Dakota has some of the most draconian anti-marijuana laws on the books. Why did the state end up with such extreme laws?

In every state, we see the product of leadership and the positions taken by state legislature and governors—and we’ve had very, very conservative state legislators and governors for many, many years. It goes all the way back to the mid-70s, the last time we had a Democratic governor in South Dakota. Almost 50 years.

That’s part of it, a political agenda that doesn’t necessarily reflect the people of the state. It’s the one-party dominance I would assert that has led to many of the positions taken by the state of South Dakota.

Do you see cannabis reform as a bipartisan issue? I feel like it’s often framed that way, but at the same time it seems as hyper-polarized as every other issue right now.

It’s an interesting question. It depends on what context you’re referring to. If you’re referring to elected officials, it doesn’t appear to be very bipartisan, even though there are Republicans and Democrats that have taken leadership roles.

“South Dakota is a very conservative state. And yet there’s a real chance it could pass both medical marijuana and recreational cannabis this year.”—Tom Daschle

If you look at it on the basis of what the people believe, there is strong bipartisan support for cannabis modernization and legalization.

South Dakota is a good example. It’s a very conservative state, it’s a red state. It’s going to vote for yet another Republican state legislature. And yet I think there’s a real chance it could pass both medical marijuana and recreational cannabis this year.

South Dakota couldn’t do that were it not for the fact that Republicans and Democrats and Independents all support it. At the grassroots level there seems to be broad bipartisan support; at the elected level, not so much.

What are the most compelling arguments for South Dakotans in particular when it comes to legalization?

I think there may be four different reasons that South Dakotans appear to be very supportive of legalization. I don’t put them necessarily in any order of priority.

South Dakota is not a very wealthy state. It is struggling economically for a lot of reasons: the COVID situation; agriculture is not what it should be; the deep recession we’re facing is closing a lot of small businesses in South Dakota. We estimate, and the South Dakota Legislative Research Council estimates, that [legalization] could generate perhaps as much as $250 million in new tax revenue by 2030 [Note: the report itself only accounts for the years up through Fiscal Year 2024.]

That’s enormous. It would be a huge consequential impact on the South Dakota fiscal state of affairs today. So the first [reason] is the revenue stream that legalizing cannabis could produce.

The second is that we anticipate just as it has done in other states, we could see a huge surge in tourism. Tourist dollars cycle through the entire economy and I think you could see a significant increase in South Dakota as we’ve seen in Colorado and many other states.

The third is one I’m particularly interested in: where law enforcement officers focus their efforts. They could focus them on serious crimes instead of on young people who have had the misfortune of being caught [with cannabis]. I think this’ll unclog our courts and our jails and our prison system and save tax dollars as well. That to me is a very compelling argument. That argument resonates with a lot of younger South Dakotans, especially.

Finally, where we have seen legalization already, overwhelmingly we find people in those states have come to support it by more than a 2 to 1 ratio. I think in Colorado it’s a 4 to 1 ratio. They thought it was a good idea when it passed and now believe even more strongly that it was the right choice.

For all those reasons I think South Dakotans are increasingly comfortable with this notion, and hopefully we’re going to see a positive vote soon.

Max Savage Levenson likely has the lowest cannabis tolerance of any writer on the cannabis beat. He also writes about music for Pitchfork, Bandcamp and other bespectacled folk. He co-hosts The Hash podcast. His dream interview is Tyler the Creator.