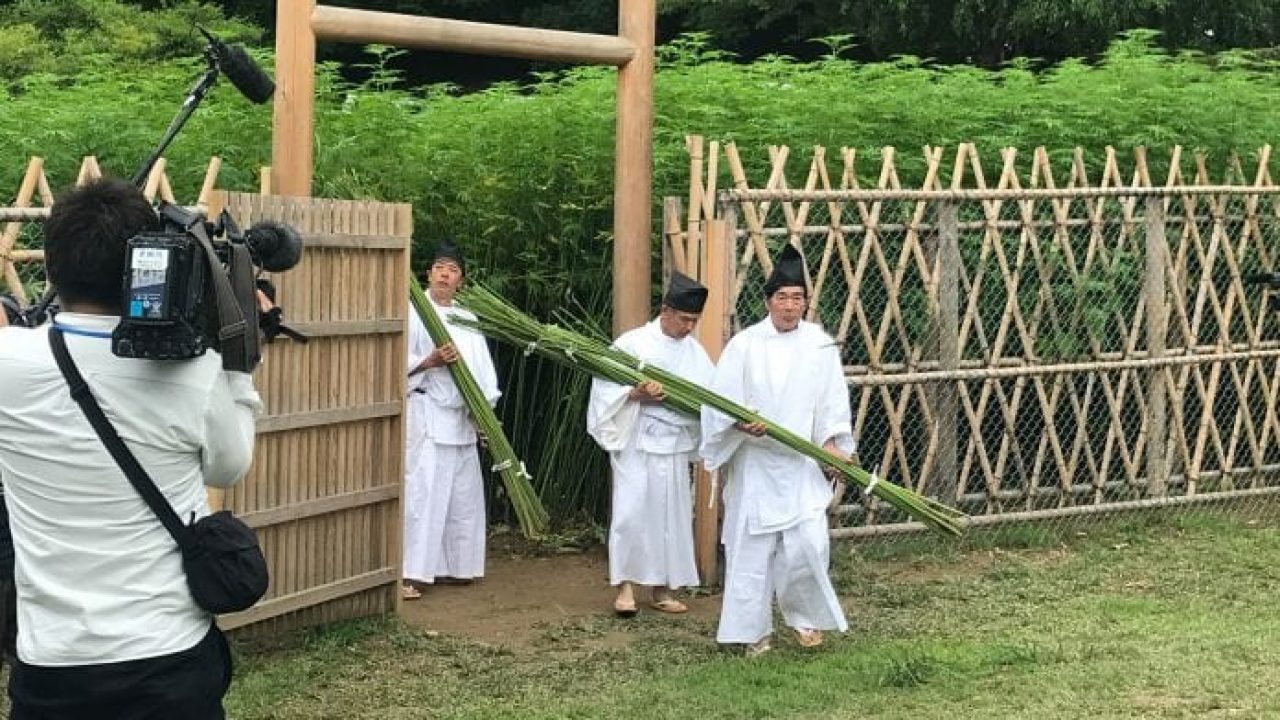 Hemp harvest, July 2019
Naoko Miki of Green Zone Japan explores the storied cultural and legal history of cannabis and hemp in Japan.
Cannabis has a long history in Japan, dating back to its pre-historical period. Fibre and seeds of hemp have been discovered in the remains of human habitats from the Jomon period (10,000 BC to 300 BC).

Throughout history, hemp was a widely cultivated crop and played a significant role in Japanese people’s lives. People wore clothes made of hemp, used hemp ropes in a variety of ways, crafted hemp paper, ate seeds, and made oils. Ninja apprentices jumped over fast-growing hemp plants to improve their jumping skills. Feudal lords of the Edo era encouraged its cultivation to strengthen the economy, and wealthy merchants made fine clothing with hemp. Hemp fields were abundant throughout the nation.

Past: before the prohibition
Hemp is revered as a sacred plant in Japan’s religions. Japan’s indigenous religion, Shinto, regards it as a symbol of purity and fertility and has been using it in ceremonies and rituals in various forms. Shimenawa (enclosing rope) made of hemp fibre is hung outside Shinto shrines to indicate it is a sacred space, and to ward off evil spirits. A Sumo wrestling grand champion (Yokozuna) wears a shimenawa around his waist to purify the ring in a ceremony called dohyo-iri. People burn dried hemp stalk cores to honour and welcome the spirits of the ancestors during the three-day bon festival, a Buddhist custom.

Cannabis was medicine as well. It was listed in the pharmacopoeia and prescribed to treat asthma, mitigate pain, and enhance sleep, among other uses. Cannabis tinctures and cigarettes were widely available in pharmacies and were advertised in newspapers.

With such a long and rich history, one might think today’s Japanese culture would be welcoming to the recent global surge of interest in all things cannabis-related. Not so. Pretty much all the above usage of cannabis was lost when Japan was defeated in World War II.

Article 4 (1) It is prohibited for any person to commit the following acts:

(i) Importing or exporting Cannabis (excluding cases where the Cannabis researcher receives authorisation from the Minister of Health, Labour and Welfare and imports or exports Cannabis.);

(ii) Treatment with medicines manufactured from Cannabis or distributing it for treatment;

Ceremony commencing the weaving of the sacred hemp clothPresent: political deadlock
This antiquated 72-year-old law is what dictates the current situation in Japan with regards to cannabis/hemp.

Cultivation of hemp is still possible today and does happen under strict control by the government. Only those who have a cultivation licence can grow. Due to the burden of the bureaucratic process for obtaining and maintaining a licence and the emergence of alternative materials for fibre, the number of hemp farmers has dwindled. In 1954, there were 37,313 hemp farmers in Japan, but the most recent statistics indicate that there were just 37 in 2016.

One of these very few remaining lineage hemp farmers, the Miki family (no relation to the author) of Tokushima prefecture has been carrying the tradition of growing, processing and weaving hemp cloth for Japan’s Imperial family for generations. On 15 November 2019, as a part of a ceremony called Daijosai in which our newest emperor, Emperor Naruhito, was enthroned, four rolls of pristine fabric woven from hemp fibre, called Aratae, were presented to the emperor by the Miki family. Hemp is still used in some other religious contexts as well – but these uses are exceptions.

Over the past 70 years, the propaganda against cannabis disseminated by the Japanese government has been rigorous and intense. Except for precious few who remember seeing hemp fields as a child, hardly any Japanese person alive today has seen a cannabis plant, let alone touched one. For almost all Japanese, cannabis – which, they are told, ‘makes you hallucinate if consumed’ – has been a strictly prohibited drug all their lives. Even today, the Ministry of Health, Labour and Welfare (MHLW) is publishing anti-cannabis messages, calling cannabis a demon that rots the youth. Yes, we are still very much in the Reefer Madness era.

Hemp fiber waiting to be made into threadsOther than the exceptionally small number of licensed farmers and an even smaller number of research licence holders, no one is allowed to cultivate, possess, or distribute cannabis for any reason or purposes including medical use or research, and even the possession of a small quantity – as little as a gram – of cannabis can result in an arrest. Possession of five grams of dry flower for personal use can be punished with a prison sentence of up to five years.

Harsher still is how these ‘criminals’ are seen in society – if you are in showbusiness and caught for the possession of one or two grams of cannabis, your career is over and you are dismissed from society. People regard it as a grave sin which cannot be atoned.

On the medical cannabis front, there is no access whatsoever. In 2015, a Stage 4 liver cancer patient was arrested for growing his own plants and fought in court for his rights to use cannabis ‘to save his life’. He passed away before the trial concluded.

Future: where do we go from here?
Despite the current outdated stance taken by the Japanese government, it is impossible to ignore the overwhelming volume of cannabis information that floods in via the internet.

The need for legal reform is obvious, if Japanese people are to enjoy the many gifts the cannabis plant offers. But in order for politicians to listen, we need more than a small group of advocates. We need doctors to want to use it for their patients.

This was why Green Zone Japan (GZJ) was founded in 2017 by my colleague Yuji Masataka, MD, and myself, with the aim of bringing the most up-to-date evidence-based information on medical cannabis to Japanese audiences – particularly medical professionals. Japanese people tend to see doctors’ words as indisputable authority; and if doctors disapprove of cannabis, there is little chance for patients to be able to experience what cannabis might do for them. Hence we have invited the world’s renowned researchers on cannabis such as Dr Ethan Russo of Seattle, Dr Edward Maa of Denver, and Dr Donald Abrams of San Francisco to talk to Japanese medical professionals in the hope that by hearing from such reputable people Japanese doctors might realise that there is science behind cannabis therapeutics.

The global popularity of the hemp-derived CBD market can also be our ally. Hemp-derived CBD can legally be imported as food, if it is produced from mature stalks and the presence of THC is not detected. The Japanese CBD market is growing and is bringing with it a whole new group of consumers into the sphere of medical cannabis, expanding awareness for cannabis therapeutics.

As a result of having to comply with the Cannabis Control Act, the majority of CBD products currently available in Japan are made with CBD isolates, with a small number of broad-spectrum products. Absolutely no THC is allowed. This is not ideal, but it is better than nothing. In fact, we have witnessed one hemp-derived CBD product eliminate a six-month-old boy’s incessant epileptic seizures entirely.

This triggered a chain of events which led to an exciting opportunity. In 2019, the MHLW made an official announcement that it would allow a clinical trial of cannabis-based medicine for intractable epilepsy. A special task force has been organised with funding from MHLW: a team of 12 researchers and assisting members spearheaded by Dr Ichiro Takumi of St. Marianna University, to form a recommendation for MHLW on how the clinical trial should be conducted, including the choice of test drug and the trial protocol, by the end of March 2021. GZJ is a part of this effort. If the trial yields a successful result, it will inevitably necessitate a discussion regarding the reform of the Cannabis Control Act, which is a big step forward.

While we work toward legal reform, we need to engage and educate more people. We need more people to become aware of the vast potential of cannabis therapeutics by being exposed to accurate information and high-quality products.

As part of its education effort, Green Zone Japan is bringing California-based Project CBD to Japan by creating a Japanese mirror site. Project CBD, a non-profit organisation which has taken a leading role in making the world aware of the potential of CBD and medical cannabis, is a perfect resource to educate Japanese people about CBD within the larger context of medical cannabis.

Midori-no-wa (Green Circle) for children with intractable epilepsy (Instagram/ourson___k)We are also offering a programme named Midori-no-wa (Green Circle) for children with intractable epilepsy. One of the problems we have in Japan is that, due to being unable to manufacture source material domestically, people rely on imported products; this drives up retail prices, making it extremely difficult for anyone to use high enough dosages to be therapeutically effective on a continual basis. With the generous co-operation of Always Pure Organics Ltd., however, we are able to provide paediatric patients access to therapeutic level doses of CBD products at an affordable price. We do this with the understanding and consent of the patients’ primary doctors so as not to disturb their treatment regimen and to cause adverse drug interactions.

The programme is only a few months old and we have only a dozen or so patients who have only just started using CBD, but one of the patients is already showing a notable improvement and no longer needs a previously scheduled brain surgery. It is our hope that an increase in the number of people who have experienced the benefit of cannabis therapeutics first-hand will result in heightened awareness and more people demanding wider availability of cannabis medicine.

Slowly but surely, we feel a change coming.

This article is for issue 4 of Medical Cannabis Network. Click here to get your free subscription today.